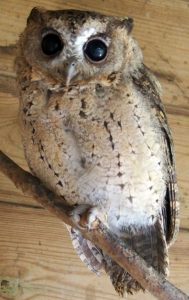 Scientific name: Otus bakkamoena
Height: 230mm–250mm
Geographical distribution: Southern regions of Asia from eastern Arabia through the Indian Subcontinent, except the far north, east across much of Southeast Asia to Indonesia.
Habitat: Common resident bird in forests and other well-wooded areas, and nests in a hole in a tree.
Diet: It feeds mainly on insects, sometimes rodents, lizards and birds.
Status: Widespread and locally common.

Here are the names of the Indian Scops owl we have at the sanctuary: